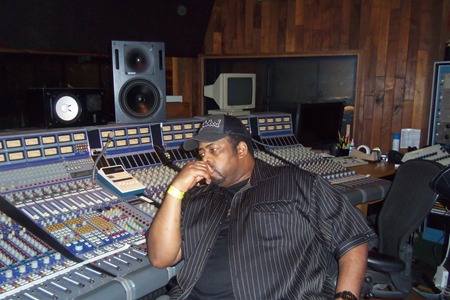 Garry Moore is a singer, songwriter, musician, and producer! He wrote his first song at age 12 and now has a catalog of over 600 songs. Garry  began his musical journey at age 9 when his grandmother decided to form a gospel quintet with him, 3 cousins and 1 of his close friends.  Garry was the lead vocalist of the young group. They sang in churches all around town and became very popular within the community and abroad. At age 10 he was influenced greatly by the "Beatles" and picked up the guitar. His father played also which inspired him as well. As he grew older he sharpened his guitar skills listening to guitar greats like... "Jimi Hendrix, "Carlos Santana, "Al Mc,kay, "George Benson, and "Hadley Hockensmith.  His gospel music influences were "Andrae Crouch, "Edwin Hawkins, "The Mighty Clouds Of Joy, "Rance Allen and "The Williams Brothers. Secular music influences were "Earth Wind & Fire, "The Commodores, "The Jackson 5, "The Average White Band, and "The Isley Brothers. At age 19 (1979) he formed "Garry Moore & New Joy"  they recorded their first (45) single in January 1981 on the H.S.E. record label in Nashville Tennessee. Three years later the group changed their name to the name "Fire Power" and recorded their fist LP album in 1984. The group did concerts and also opened up for artist like the world renowned multi Grammy Award Winning Gospel Groups "The Mighty Clouds Of Joy" and "The Williams Brothers" during the 80's... In 1991 the group disbanded while recording on their second studio album and the material was never finished or released until 2011 when Garry decided to release 7 of his songs from the 1990 recording sessions which were unfinished, so he titled the EP "Unfinished Business" which is on iTunes. After Fire Power broke up Garry took 5 years away from the music scene. In 1996 he entered the studio for the first time as an solo artist. He released his first solo project in 1997 titled "You're Never Alone" He entered the studio again in 2000 to record "Yahweh" and regionally released the album in 2001 which rendered the #1. radio hit "Come As You Are" several songs from "Yahweh" received heavy rotation on gospel radio stations and many college stations. Garry took another hiatus from the music scene from 2001 to 2009 until a friend influenced him to record again. Which birthed the album "Paradise" in 2009 and was re-released by "Tate Music Group" in 2010. Garry's 4th Cd was released in 2011 titled "A Blessing For You" winning the award for "Best Male Gospel Artist" He released his 5th Cd in 2012 titled "Breakthrough" which won him "Best Gospel Music Producer" of 2013 for the song "God Is So Good" and a nomination certificate award for the "Best Album Of The Year" and a nomination certificate award for having 12 nominations in 11 different categories!  In 2014 the 16 track, and 6th solo album titled "HERO" was released and seven songs were nominated in 7 categories winning Garry "Best Male Gospel Artist" of 2014 for the song "I Can't Live Without You"  In 2016 "Triumphant Volume 1" was released 3 songs were nominated for music awards "You Get The Glory" won The Akedemia Music Award for "Best Christian Gospel Song" In 2017 the single "What You Come To Do" was released and nominated for 3 music awards and winning The Akademia Music Award for Best Christian/Gospel Song.  In 2018 the single "God Is Bigger" won 2 awards. The Indie Music Award for 'Best Gospel Producer' and The Radio Music Award for Best Gospel Artist of the year.

​​Music for the Soul